Spain has so many stunning beaches I never even considered Ibiza as a destination. You see, Ibiza is so famous for its party scene that I just wasn’t interested. However when I saw a return flight to Ibiza going for 20euros it didn’t take long for my love of bargains to overrun my aversion to what I pictured Ibiza to be.  And wow was I in for a surprise!

Forget everything you think you know about Ibiza. Does it have discos and a huge party scene? Yes, that part is not a lie but it is a front. A cover to protect its real self from flimsy tourists. But Ibiza is so much more. Ibiza is the clearest azure waters I’ve seen in Spain. It’s the rewarding coves hidden at the end of  trails; The sheltered bays and the rugged coastlines;  Its the rosemary and sage growing everywhere; the little orange grove along a trail. Its the spectacular sunsets; and the extraordinary array of cacti and succulents found everywhere. It’s just so much more than expected. 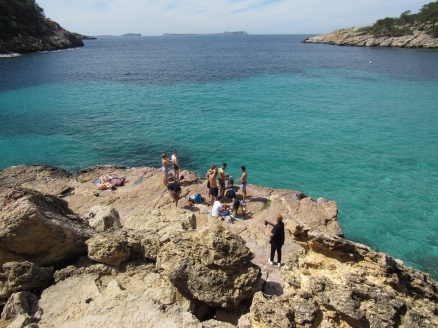 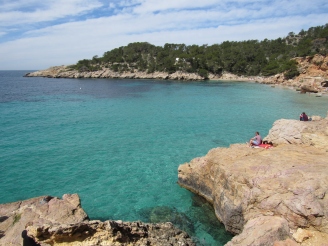 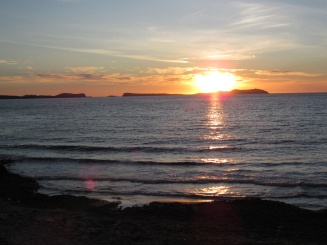 Ibiza has a legendary hippy history that I felt sure was just that, a legend. I was wrong. Well, maybe not wrong exactly, vestiges of its iconic place in the history of the 60’s  can be found in the amazing hippy market in Sant Eulalia. But, besides that market you’d be hard pressed to find  anything that hasn’t been taken over by the clubbing scene.

Yet, what does remain is the essence that brought them here in the first place.  It’s almost as if something in the air makes everyone happy and agreeable.  Within 24 hours of landing in Ibiza I was hanging out with a beautifully diverse group, we were all traveling solo or at most in twos and for no obvious reason – besides the fact that we were all staying in the same hostel – we drifted together. The first day we were 2 Australians, an American, a Costa Rican, a Bulgarian, plus me. By the second day a Brazilian,  2 Spanish,  and more Americans had joined us. And it wasn’t just nationalities that set us apart. Some of us were teachers, others young enough to be on a gap year before University, while others were finishing their master’s degrees. We went on hikes, swam, borrowed boats, cooked and had our meals together, we even shared clothes (I for one hadn’t expected it to be so warm and if it hadn’t been for Lucy I would have had to endure 10 days of  traipsing around in the sun with jeans).

Anyways, what I’m trying to say is that I’ve travelled solo for years now and I always meet people to hang out with and have even formed long-lasting friendships with some of them but seldom before had I enjoyed being part of such a large, varied and free-spirited group.

A fact that might have helped is that we were there before the clubbing season began. Specifically easter 2018.  What this means is that there were no crowds to be dealt with.  i.e. we could easily find a spot to sit and watch the sunset, or go skinny dipping without having to worry about offending other people’s sensibilities. So if having most restaurants, bars etc. be closed is the price to pay for being able to savor the serene natural beauty of the island then I’ll gladly pay it.

In the three years I’ve lived in Spain, my week in Ibiza was by far my favourite beach break. If you are thinking about it please go, you will not regret it. Just make sure you explore the whole island.  In my 10 days there I went to three different towns. Ibiza city -with its historic center and shopping streets, Sant Antoni – with its youthful vibe, and Sant Eulalia – with its more mature laid back scene.

A few Facts and tips: In Sant Antonio I stayed at the Amistat Hostel. Without a doubt the most technologically advanced Hostel I’ve ever seen, (instead of key cards everything is fingerprint activated!). Its super clean, has more than enough toilets and showers for everyone, and it has an AMAZING set up in the common area – swimming pool included! Simply put the facilities are superb. The only reason I’m not including it in my post about outstanding hostels is because the staff although friendly enough and forthcoming with tips on what to do they simply didn’t go that extra length to make you feel welcome.

I’ve no recommendations for Ibiza city because the hostel I chose there was nothing special. And in Sant Eulalia I stayed at an Airbnb that again, was good but nothing special.

Moving between the three cities I visited was super easy, there’s a public bus transport system that runs very frequently between all three. I don’t remember the schedule but the buses were good and cheap! And once in whatever town you are visiting everything is walking distance.

Oh, and of course try to avoid the crowds. Go in April-May  or in late September and October. Even the weather is better then, warm enough you can get a tan but not so hot you don’t want to be under the sun.

This site uses Akismet to reduce spam. Learn how your comment data is processed.

If what you want is to find out how to obtain a visa for “X” or an itinerary for “y” this is not the right place. If, however, what you want is to read a traveller’s journal then you’ve reached your destination. What follows is 100% subjective. I might throw in a fact here or there but ultimately it’s about my personal experiences traveling in this planet we call home.